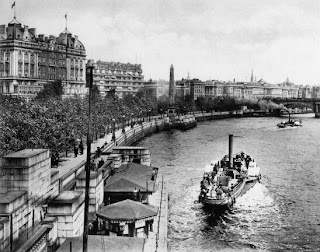 We all know that Cleopatra's Needle

, which stands on London's Victoria Embankment, has nothing to do with the last queen of Egypt. The obelisk was given to the British government in 1819 by the ruler of Egypt and Sudan Muhammad Ali to commemorate of the victories of Lord Nelson at the Battle of the Nile and Sir Ralph Abercromby at the Battle of Alexandria in 1801.
But it was not until 1878 that the oblelisk

– actutally for Pharaoh Thotmes III in 1460 BC, making it almost 3,500 years old – was erected by the River Thames.

But did you know there is a 'time capsule' buried beneath the monument?

The capsule is said to contain the following:

Photographs of 12 English Beauties of the day.
A box of hairpins.
A box of cigars.
Several tobacco pipes.
A baby's bottle.
Some children's toys.
A shilling razor.
A hydraulic jack and some samples of the cable used in the erection.
A 3 inch bronze model of the monument.
A complete set of British coins.
A rupee.
A portrait of Queen Victoria.
A written history of the strange tale of the transport of the monument.
Plans on vellum.
A translation of the inscriptions.
Copies of the bible in several languages.
A copy of Whitaker's Almanack.
A Bradshaw Railway Guide, a map of London.
Copies of 10 daily newspapers.

Cleopatra's Needle; A History of the London Obelisk with an Exposition of the Hieroglyphics

Paul Boughton
London, United Kingdom
I have a Diploma in Egyptology from Birkbeck College (University of London) and have published three articles in the UK-based Ancient Egypt magazine. They are: The Lost Sarcophagus (December/January 2009); The Titanic Shabti (August/September 2008); Menkaure’s anthropoid coffin: a case of mistaken identity? (August/September 2006).

Can't find what you are looking for? Then try Google Search

Promote your Page too